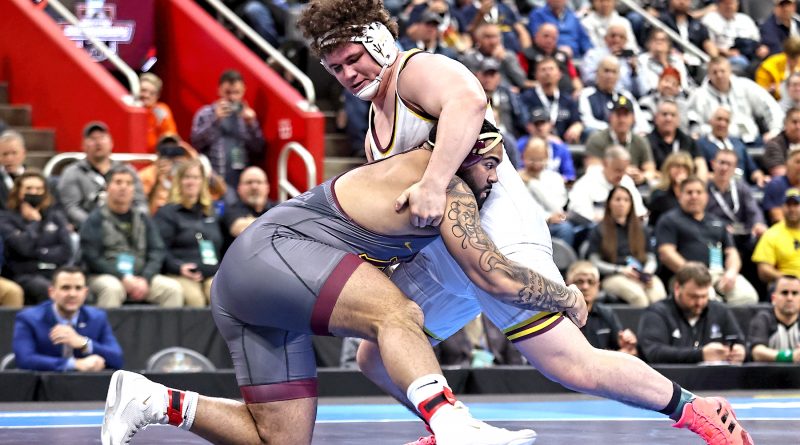 NEWTON, Iowa — Everyone who follows wrestling knows Gable Steveson is a “one-of-a-kind” talent, maybe the best heavyweight in college history. In 2021, the Minnesota wrestler finished an undefeated season with the NCAA title and was named co-winner of the Dan Hodge Trophy (with Spencer Lee of Iowa), then went to Tokyo this past summer and won an Olympic gold medal in dramatic fashion.

The Minnesota junior dominated the voting between himself and the other seven Hodge finalists. Steveson got 49 of 59 first-place votes from the panel of retired coaches, a representative from each of the national wrestling organizations, various media members and past winners. Cornell’s three-time NCAA champ Yianni Diakomihalis finished as the Hodge runner-up with five first-place votes. Penn State’s two-time champ Nick Lee finished third with three first-place ballots.

Steveson also won the fan balloting by a huge margin, getting 8,739 votes out of 25,990 cast. Keegan O’Toole of Missouri, who won the 165-pound title in 2022 as a second-year freshman, finished in second place with 4,344 votes on the strength of a bonus-point percentage of 64 percent during his undefeated 25-0 season. The Nittany Lion Lee finished in third in the Fan Vote as well with 3,167 votes. Diakomihalis was fourth with 2,855 votes.

“That’s really something,” said Steveson, when notified he had won the prestigious award for the second straight time. “And to be the first heavyweight to do it twice really means a lot to me.”

In fact, the only other heavyweights to have won the award, which was started in 1995 by Mike Chapman, the founder of WIN Magazine, are Kerry McCoy of Penn State in 1997, Stephen Neal of Cal Bakersfield in 1999 and Steve Mocco of Oklahoma State in 2005.

Sponsored by ASICS, the Dan Hodge Trophy is awarded to the most dominant wrestler each year by WIN and Chapman’s company Culture House. It is named after Dan Hodge, the undefeated, three-time NCAA champion at 177 pounds for the University of Oklahoma, and the only wrestler to ever appear on the cover of Sports Illustrated (April 1, 1957).

“This is a big deal for Gable and for Minnesota wrestling,” said Brandon Eggum, in his sixth season as head coach and 21st year overall on the Gopher staff. “It’s a very prestigious award, picked by your peers. It is the highest award in the sport and to get it shows the respect that the winner has.”

Steveson is the second Gopher to earn the award. Jayson Ness, a 133-pounder, won the trophy in 2010.

Criteria for the Hodge are record, dominance/bonus-point percentage, quality of competition and sportsmanship.

Gable had the highest bonus-point percentage of any of the eight finalists at 83 percent. With an 18-0 record, the Gopher had one pin, six technical falls, seven major decisions and one medical forfeit. Only three opponents kept him from scoring bonus points this past season.

Diakomihalis finished the year with a 28-0 record in his first year up a weight at 149 pounds after winning the 2018 and 2019 NCAA titles at 141 pounds. With five pins, six techs, five majors and two injury defaults, the Big Red junior had a bonus-point percentage of 64 percent.

Winning his second straight title at 141 pounds, Lee finished 22-0 with a bonus percentage of 59 percent. He had two pins, four tech falls, six majors and a medical forfeit.

Steveson appeared headed for something special at a young age when his parents named him after Dan Gable, who carved out an incredible record as a wrestler and coach, winning 180 straight matches in high school and college. That Gable went on to win Olympic gold in 1972; something Steveson duplicated last summer in the Tokyo Olympics.

Now, the Gopher superstar faces another huge challenge: what to do with his vast talent in the near future?

He has already signed a contract with the WWE of professional wrestling, following in the footsteps of such great Minnesota heavyweights as Verne Gagne (two-time NCAA champion and a huge pro star in the 1950s and ‘60s) and Brock Lesnar (NCAA champion in 2000, and one of the biggest names in the WWE for almost two decades).

So, with an Olympic gold medal and one Hodge trophy already, and a handsome contract in his back pocket, did Steveson feel pressure at this year’s NCAA tournament in Detroit?

“I felt some pressure,” he confided. “I wasn’t worried about winning but I wanted to be performing well. I felt the pressure of leaving on a good note.”

Steveson’s five NCAA wins came by scores of 25-10, 23-8, 10-5, 8-3 and 6-2. And when it was all over, he took his shoes off on center mat and then gave the huge crowd and national ESPN audience his trademark finish: a running backflip.

“Gable is one of the best competitors I have ever been around,” said Eggum, a three-time All-American himself for Minnesota and a silver-medal winner at the 2001 World Championships. “He hasn’t even hit his prime yet and we might be seeing the greatest heavyweight ever.”

Is there any chance Steveson might come back for his final season of Gopher wrestling, or has he truly closed that door for good?

“My goal and job was to make Minnesota great and to leave big footsteps for others to follow,” Steveson said. “Verne Gagne is a Minnesota legend, and Brock is too. I wanted to set the tone. The things I was doing weren’t normally done by a heavyweight.”

Eggum feels there is still somewhat of a chance his star heavyweight could come back for a final season.

“There’s always a possibility he could do both,” said Eggum. “We could have a very good team next year and Gable could be a huge part of that. He is a great leader, on and off the mat. In the locker room, he’s just one of the guys. Of course, they all have a lot of respect for him.

“He has a tight bond with the team. They also know he has a lot of stuff he is dealing with. The fact that he came back this year (after winning the Olympics) shows how much he cares about the team.”

Gable has been in contact with the WWE people, in particular the creative team. Many wonder if he will be like Kurt Angle, the 1996 Olympic champion and two-time NCAA champion for Clarion University, who has often used his Olympic status to bring negative heat from the fans.

“I would like to do whatever, but just to be me,” said Steveson. “Anything that brings the crowd.”

As for the Dan Hodge Trophy, the native of Apple Valley, Minn., now has two of them. So where will the trophies be sitting? Gable said he plans to keep one at his home, along with the Olympic gold medal and his many other awards. But the other may be placed somewhere in the Gopher wrestling complex, to serve as an inspiration to others.

“The trophy will always be his,” said Eggum, “But he knows it’s important for young kids to see. Hopefully, we can display both Hodge trophies: his and Jayson Ness’s.”

Whatever the future holds for Gable Steveson, he has already carved out his legacy in Mankind’s oldest sport, not only as an Olympic champion while still in college but as a two-time winner of the Dan Hodge Trophy.

For more information on the Dan Hodge Trophy, including a list of all past winners along with the release story and stats from the year they won the Hodge, visit www.WIN-magazine.com.